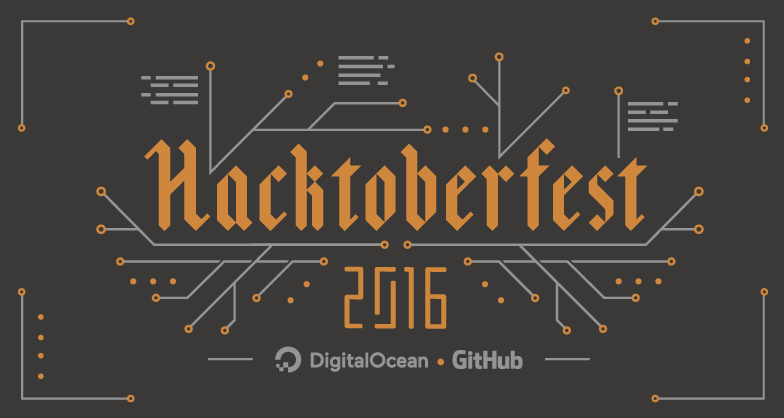 October is a special time for open source enthusiasts, open source beginners, and for us at DigitalOcean: It marks the start of Hacktoberfest, which enters its third year this Saturday, October 1!

Hacktoberfest—in partnership with GitHub—is a month-long celebration of open source software. Maintainers are invited to guide would-be contributors towards issues that will help move the project forward, and contributors get the opportunity to give back to both projects they like and ones they've just discovered. No contribution is too small—bug fixes and documentation updates are valid ways of participating.

To participate, first sign up on the Hacktoberfest site. And if you open up four pull requests between October 1 and October 31, you'll win a free, limited edition Hacktoberfest T-shirt. (Pull requests do not have to be merged and accepted; as long as they've been opened between the very start of October 1 and the very end of October 31, they count towards a free T-shirt.)

Connect with other Hacktoberfest participants (Hacktobefestants?) by using the hashtag, #Hacktoberfest, on your social media platform of choice.

We wanted to make it easier for contributors to locate projects that needed help, and we also wanted project maintainers to have the ability to highlight issues that were ready to be worked on. To that end, we've introduced project labeling, allowing project maintainers to add a "Hacktoberfest" label to any issues that contributors could start working on. Browse participating projects on GitHub.

We've also put together a helpful list of resources for both project maintainers and contributors on the Hacktoberfest site.

Thank you @digitalocean for my #hacktoberfest t-shirt! Can't wait for next year #opensource pic.twitter.com/NpWP0kO05t

Ready to get started with Hacktoberfest? Sign up to participate today.