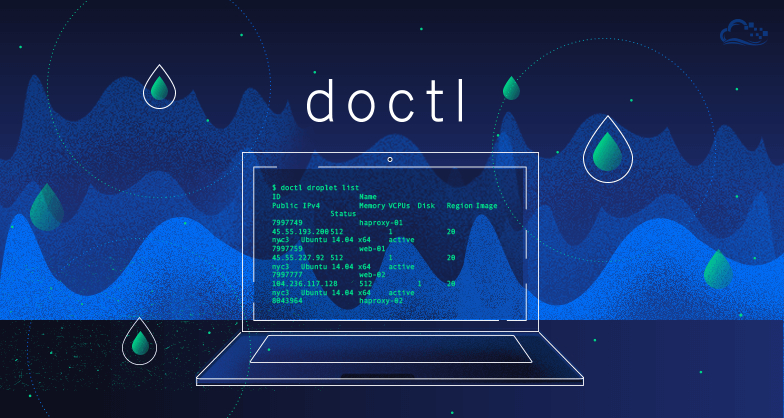 Why a CLI utility?

When DigitalOcean entered the market four years ago, our team spent an extraordinary amount of time designing a web user interface that was easy to use and inviting for developers. Simple and elegant design is something we have always strived for as a company. Over time, as the amount of functionality has increased, the ease of use has remained.

That goal goes beyond just the web interface; we've sought to build an API that is just as easy to use. When we released version 1 of our API, a few popular tools emerged. Tugboat, which allowed you to manage your DigitalOcean resources from the comfort of your command line, was a particular favorite. Late last year, we deprecated V1 and released DigitalOcean API V2. With API V2 came a plethora of improvements and an enhanced developer's portal which provides information on every API endpoint along with usage examples and guides.

As developers ourselves, we spend a lot of our time in a terminal. So we have decided to upgrade that experience as well with an official command line interface (CLI) tool entitled doctl. doctl provides an accessible interface to our API, taking full advantage of improvements introduced in API V2 and support for newer DigitalOcean features like Floating IPs. It allows us to deliver more complex features and workflows as well.

doctl is available as a precompiled binary for Linux, Mac OS X, and Windows. You can download the release on GitHub.

Getting started with doctl is easy. To retrieve your DigitalOcean access token and save it locally, just run:

As an example of what doctl can do, we can create a Debian 8 Droplet in NYC1 with a public SSH key installed for the root user in one line:

doctl can also configure the output. By default, it will be displayed in a table. If you wanted to use the output programmatically, JSON might be a better choice. For instance, you could list all of your Droplets in NYC3 as JSON using:

To learn about all the features available, check out the full tutorial over on our community site.

doctl is not only an interface to the DigitalOcean V2 API. It also simplifies more complex workflows. Previously, when using the API to snapshot a Droplet, you'd have to separately retrieve the action ID and continuously query the action endpoint to know the status of the snapshot. Now doctl can handle that for you. Using the --wait flag, it can snapshot a Droplet and block until the action completes. The same concept applies to other activities which don't complete instantaneously, like Droplet creates.

doctl also simplifies activities which do not have an API endpoint. If you create a Droplet and don't assign the IP address in DNS, doctl allows you to SSH to your Droplet by name.

By default, it assumes you are using the root user. If you want to SSH as a specific user, you can do that as well:

Like much of our internal tooling, doctl is written in Go. It is completely open source and available on GitHub. We're excited to be able to share this with our community and look forward to collaborating on building a tool we hope you'll love. Check out the contribution guidelines, and dive into the code.

What else you would like to see from doctl? Let us know in the comments.