Zhanna Schonfeld: From Designing Toys To Building Our Website 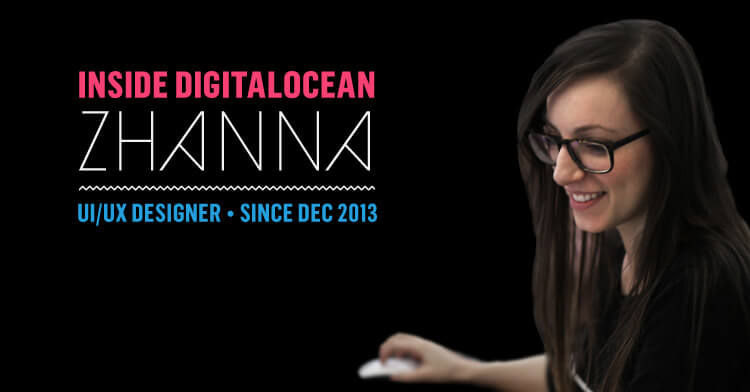 Zhanna is sitting in an empty office with our creative director, making last-minute commits before the looming deadline of launching the new DigitalOcean website. The last pull request is merged and there's no time for further Q & A or browser testing. While the rest of the team is out celebrating the Series A, Zhanna is making sure the website is ready to complement the announcement. Tall order, as Zhanna had only started working for DigitalOcean in December. But what she was able to accomplish not only surpassed our expectations – it blew them away.

After graduating with a BFA in Industrial Design from the Cleveland Institute of Art, Zhanna joined a major toy company in Ohio. While this may seem like a dream job, Zhanna quickly became bored, stating "it was a repetitive process to churn out new variations of the same plastic products. In my mind, I'd mastered it and my career stagnated."

Her transition into the tech community was gradual but natural, having been fascinated with the web from a very young age. "It's funny," she says, "I was building websites since I was a kid on GeoCities, back when the <blink> element was around causing seizures, but I wasn't very familiar with the industry." Her curiosity as to why some websites succeeded and others didn't continued to grow, and in 2010 she left her job to begin freelancing, helping colleagues on the design and front end of their projects.

After developing an impressive portfolio, Zhanna decided to venture out on her own. Aspiring to create something amazing and beautiful, she co-founded Obsesh.com – a photo-sharing app for makeup enthusiasts. Although it's long been abandoned, the experience was enough to motivate Zhanna to leave Ohio and immerse herself in the startup culture of NYC.

It wasn't long before Zhanna joined Quirky and was responsible for designing their web interface. She continued to develop her knowledge of HTML, CSS, JavaScript and Git as her appreciation for developer culture grew. She could speak their language, work with their tools, and write code. It was here that Zhanna was also given her first opportunity to work with a team of developers on the web platform and watch the company scale extremely fast. When asked for the most valuable takeaways from that experience, her reply was simply "change is constant and make data-driven decisions."

Looking for a new startup, Zhanna began searching open positions on Dribbble and felt a strong connection to DigitalOcean after watching an early TechStars video. She was hired and immediately started helping our creative director Jesse Chase build out the new community, simultaneously producing beautiful images to complement our social content. When asked about the role of aesthetics in tech, she says "to me design is shaping the experience for the user. It's said that good design is invisible; that it feels so right and seamless that you don't even notice it."

Little did she know she would soon be asked to apply that philosophy and create an entirely new website, in the midst of a Series A round, in under a week's time. Zhanna remained unfazed by the pressure: a combination of natural talent and a creative process that puts heavy emphasis on testing and metrics that validate designs. "It's about getting into people's heads and figuring out the best way to get someone to do what they need to do on your platform," she tells me with a smirk, drawing inspiration from Steve Krug's book Don't Make Me Think.

"We were trying to embody our core values of simplicity and love. We kept it simple even in the tech aspect by using the Middleman framework– a static site generator versus a rails app. Keeping the site static makes it easy to build and maintain, and gives the designers complete control and ownership of it. We worked six days (and nights) to build the website from the ground up."

To tell the DigitalOcean story, Zhanna showed off the control panel's intuitiveness by incorporating demo videos right on the home page. "It's easy to add a ton of features and buttons and options," she says, "But that just overwhelms people."

Zhanna is now focusing on the new community, building out better search and navigation, mobile capability, personal profiles, a voting system and other outstanding upgrades. While not yet complete, without Zhanna "none of this would be possible" says creative director Jesse Chase. "From sharing her UX philosophies, to shedding light on a particular design comp, js library, or css framework, Zhanna has been an incredible asset to this team."

But the feelings are mutual.

"The best ideas come from speaking to people, from working on problems and seeing things from a different perspective," says Zhanna. "DigitalOcean understands that in every aspect – it's the place and culture that I've always wanted to work for."